What is the Loudness War?

The Loudness War is the trend developed over the years within the music industry where the loudness levels of commercial releases have been pushed to (and beyond) the limit of distortion in order to maximise the sonic impact to the end user/listener.

This is something that was already started as a trend before the digital era. Over the years some record labels raced against each other in order to achieve the loudest music productions (loudest vinyl cuts).
The reason behind this is quite simple. By having the loudest productions out there, record labels believed they could sell more records.

Nowadays, even if the role of the label (due to the internet revolution) is not as pivotal in music distribution as it once was, this trend seems to carry on even at grass roots level (independent and unsigned artists).

As a mastering engineer, unfortunately, I can certainly testify to that.

In reality, this trend is driven by a misconception. What our brain perceives as “better” is just a distorted perception of our hearing senses. In other words, our perceived loudness (especially of low frequencies) is increased/enphasised at higher dBspl (higher volume). The same piece of music played back at low volume always seems to be lacking of bottom end…doesn’t it?

This graph shows us how the linear quality of our hearing goes literally out of the window around the extremes of our hearing range (20Hz-20KHz).
In other words, at low levels what we are hearing is mostly MF (mid frequencies)…and for a very good reason.
The humans being, unlike many other animals, has heavily relied on verbal communication for its evolution. That made it necessary to develop a specific frequency related hearing sensitivity. As it happened, between 1-4KHz (where most of the relevant speech-related information are found).

As you can see from the graph, another very important information is given to us. Our hearing assumes a more linear behaviour at higher dBspl. This means, the higher the volume of music, the more bass frequencies are perceived and the more pleasurable the listening experience becomes.

This explains also why some people tend to mix at very high SPL levels, without realising the adverse effect this has on their long term hearing health.

The advent of digital brick-wall limiting made it possible for levels being pushed a lot further … but with massive trade-offs.

The biggest one being the music quality. BW limiting introduces distortion. If used correctly, this amount of distortion is neglectable (better than clipping distortion which is audible) but if overused…than it gets ugly.

Today’s music is suffering big time because of this…when level matched, a heavily limited master will always sound worse than an unlimited one. ALWAYS.

FROM RADIO TO STREAMING

Many things have changed since the advent of the internet, and one of them is the way we listen to music.

Tablets, smartphones, laptops, and computers, in general, have become the main playback devices for millions of people.

iTunes, Spotify, and Youtube have become the gatekeepers of the indutry 2.0 and the main music sources for online music playbacks.
This means that the majority of the music used every day is hardly ever downloaded, but streamed online in real time.

This concept is pivotal. Music is read from external servers and never stored locally onto our devices. Without an internet connection, there is no streaming and therefore there is no music.

This is what allows the likes of Apple, Spotify, and YouTube to normalise the loudness of their platforms in order to deliver a constant loudness across all their streams.

The process of loudness normalisation is the off-line process applied by the digital platforms in order to stream all of their music in a constant loudness fashion.

Before loudness normalisation was introduced, you had massive gaps in terms of loudness across different productions from different decades. For example, playing the latest pop tracks after the original “The Dark Side Of The Moon” could potentially blow your speakers!

With the introduction of LUFS based loudness normalised algorithms, this doesn’t happen any longer.

BUT WHAT IS IT?

Radio stations have been normalising their loudness for a vey long time. While aiming at broadcasting their programs over the hottest radio signal they could afford (a better and stronger signal meant for people to listen to that radio station more favourably than others), they also reduced the dynamic of their programs (using compression and limiting) to prevent their listeners to keep fiddling with the volume’s knob between songs.

If in the past your music didn’t sound great on the radio, no one would lose any sleep over it.
CD’s where always there for a more pleasurable listening experience.

BUT in 2019, if your music sounds bad on Spotify or iTunes Radio or Youtube….well then it’s a different story.

The lack of rigid standards in the music industry led to this train wreck of a music industry we have nowadays and the fact that Apple and Spotify decided to adopt loudness normalisation was a very welcomed news indeed.
The only big player that didn’t join the party was YouTube. Youtube is the biggest source of music streaming in the world. But thankfully that changed in 2016 when YouTube announced to introduce a new loudness level of -13LUFS to all of its videos. This was slightly higher than iTunes (-16 LUFS) or Spotfy (-14 LUFS) but it was a game changer!

In 2019 now all music that is streamed online is going under some sort of loudness normalisation processing. Although the LUFS standards may differ from platform to platform, it finally means that all music plays back at the same level.

But they all aim at the same goal, which is to have all the music plaid back at a consistent loudness by dropping the levels of “hot” masters down to a specific LUFS value.

It is therefore pointless to achieve high loudness levels through mastering as “hot” masters will be pushed back by the streaming platforms.

By keeping the masters very dynamic and by respecting the LUFS values for that particular streaming platform will ensure the best playback translation. In other words, the side effects of the normalisation process will be minimal.

Although when plaid back locally, the CD master sounds way louder than the one optimised for streaming at -13 LUFS, once the file is uploaded on YouTube and goes through the process of loudness normalisation 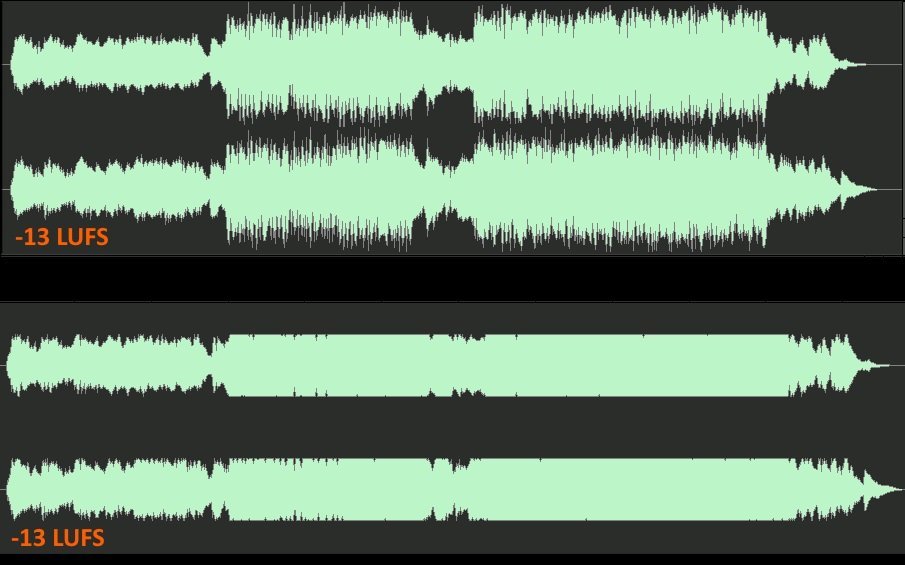 The streamed “hot” version has been dropped in levele and it is now prevented from reaching full scale. Its peaks will stay well behind 0 dBfs and because of the heavy limiting, the distortion due to heavy limiting and clipping will me more noticeable!

The “steraming optimesd” master on the other hand, has been virtually untouched and it will sound punchier, fuller and less distorted by comparison

Because of the new standards introduced and the side effects loudness normalisation can introduce, it is very important to have a clear idea of where your music will be listen to and have the right masters for it.